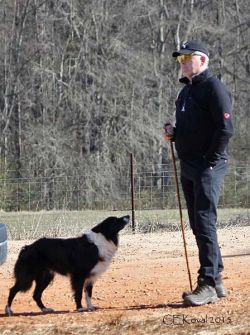 He was two time Northern Ireland Nursery League Champion (with Gwen and Jimmy); Irish North v. South Champion with Bill; he was seven times member of the Irish National Team (twice with Bill, three times with Jimmy and once with Cain, who placed 3rd in 2015), two times Irish Driving Champion with Jimmy; as Irish team member he was winner of the Semi-Finals and 5th in the Finals at the 2008 World Trial with Bill, and in 2014 he participated at the World Trial with Jimmy.

He has been the judge for major trials in Canada and Europe which included World Trial Qualifiers, and will be judging the Irish National finals later this year (2019). 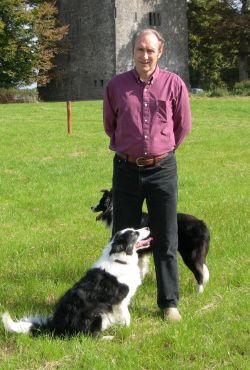 Johnny Robinson, from Coldingham, Berwickshire, Scotland, has been a Hill Shepherd for almost all his life. For 22 years he managed a flock of nearly 2000 Scottish Blackface ewes over 8000 acres, and in 1996 purchased a farm on the moorlands of the Scottish Borders.

Over the years he has won various trials and team cups and shields, and has been twice on the Scottish team at the International Sheepdog Trial. He was also a Finalist in the 2005 World Trial, and competed again at the 2008 World Trial. His expertise and love of judging brought him to the USA in 1994, and he has since repeatedly judged in several American states as well as in Canada. He has been much in demand for various European qualifiers and Nationals on the Continent, and he will be judging the Continental Sheepdog Championship for the second time this summer. In addition, Johnny has judged the Scottish National, the International, and the World Trial as well as the respected television series “One Man and his Dog” twice.

Johnny has been a Director of the International Sheep Dog Society for 12 years,as well as serving on its Scottish Council. He was Secretary of the Scottish National Sheepdog Trials in 2011 with his wife Margie, and Chairman in 2014. He is committed to the Borders Nursery League which organises the winter trials for younger dogs, and frequently has a dog in the Scottish Nursery Finals.

He has bred and trained his own line of dogs which have gone on to compete successfully at national and international level in Europe, Scandinavia, South Africa and the USA. He also has helped train novice handlers and their dogs at his farm, and enjoys competing and travelling to outstanding competitions worldwide.