The ISDS was founded in 1906 in the UK. Their main objective was to improve the quality of livestock work. Partly by better information of handlers and the public, but above all by improving the working herding dog, the Border Collies. A studbook has been set up for this, and the trials that have taken place here and there have been incorporated into a structure and "crowned" with annual National Trials and the International Sheepdog Championship. These competitions are attended by the best dogs in the UK. Winning such a trial brought untold fame to the dog and handler. The winners of the past 110 years (the ISDS celebrated the centenary of these competitions in 2007) are still known today, and their names can be found in the pedigrees of today's winners.

In the UK, these herding dog contests have been around since 1873. 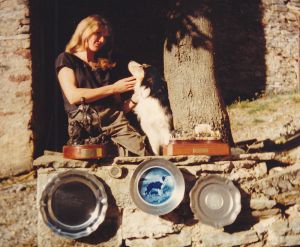 On the continent, the first Continental Sheepdog Championship took place in 1985 on the initiative of the Swiss Odette Lieber; Jim Easton acted as judge. What took a hundred years in Great Britain happened on the continent the very first time: a woman won the final. The Frenchwoman Gillian Hugo and her dog Snuff could call themselves "First Continental Sheepdog Champion for herding dogs".

The participating countries decided at their meeting in Geneva to repeat this very successful event annually. Thus, the initiative of the "Grand Old Lady" Odette Lieber led to the founding of the Organizing Committee of the Continental Sheepdog Championship, CCSC for short, which is responsible for the organization of this European Championship. For many years, Philip Hendry, Chairman of the ISDS, chaired the CCSC until Jim Easton, his successor, took over. Joséphine de Jong from the Netherlands was secretary of CCSC for many years. Her successors in office were Liesbeth Wijburg and Rikke Andersen. Currently 18 countries with more than 100 starters participate in the European Championship.

The CCSC decides whether the trials of a country applying for membership are organized according to the ISDS rules and whether the trial level is high enough. In the first year, two teams (each dog and handler) may participate; their results will decide if more teams are welcome the following year.

The Continental Sheepdog Championship has grown from a small competition with a limited number of countries into an event that can compete with the famous internationals in the UK. This is also evident in competitions such as the World Trials and other trials in the UK, which continental handlers have been visiting since the quarantine rules have changed. You can see a taste of these in Wittbek these days.